Glory harmonizes and advances the interests of the company and society by actively conducting social action programs as a good corporate citizen.

Fostering the Next Generation

In March 1995, Glory established the GLORY Foundation for Elementary School Students to support the sound development of young people. Through the foundation, the company conducts sports, arts, and cultural activities that include hands-on science classes, experience-based classes for parents and children, and a children’s theater. A cumulative total of 102,500 people have taken part in these activities since the foundation was launched.

The foundation also assists organizations that work towards the sound development of elementary school students through activities in sports, science, and culture. 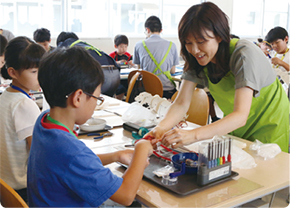 Students build caterpillar robots under the guidance of a Glory employee In hands-on science classes during the summer holidays, elementary school students build their own science projects, experiencing at ﬁrst hand the wonders of science while also cultivating their creativity and unique powers of imagination. Glory employees take part by helping the students with their projects.

In the ﬁscal year 2018 science classes, 200 students from grades three to six took on the challenge of building caterpillar robots and learned about power transmission. 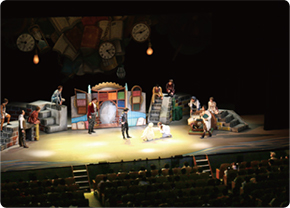 A scene from The King with Donkey Ears

The Children’s Theater project is held with the goal of enriching the aesthetic sensibilities of young people and planting in them the seeds of creativity.

In ﬁscal year 2018, a total of 2,700 elementary school students and their parents were invited to performances of the musical The King with Donkey Ears by the Shiki Theater Company.

Hands-on Classes for Parents and Children 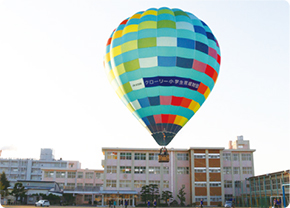 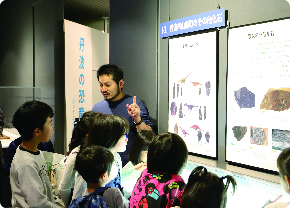 This program is held every spring and autumn with the goal of strengthening the bonds between parents and children through a range of fun and exciting experiences.

In May 2018, a total of 77 children and parents participated in the Rokkosan Pasture’s Butter Making Experience and Fossil-Hunting Excursion in Kobe, Hyogo. Then in November of that year, 300 students and their parents were invited to see a hot air balloon at a local elementary school. Participants learned how hot air balloons work and took turns boarding one anchored at the school.


Supporting the Promotion of Sports 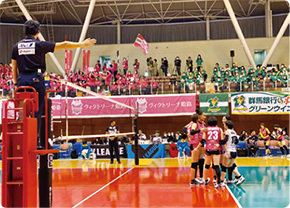 Besides playing in a V2 league, the team promotes the sport in the community through activities that include appearances on talk shows and volleyball clinics for elementary and junior high school students. Glory strives to use sponsorship as a way to stimulate community-level sports and support the development of the next generation.

This season, the team won the league’s regular round in the V2 division and also won the Final 6 round that followed. The team has been promoted to play in the V1 league next year. Glory will continue to support the team in all its endeavors.

Other Contributions to Society Glory was a cosponsor of the World Heritage Himeji Castle Marathon 2019, held in February. Fifty Glory employees volunteered on the race day to assist approximately 7,000 participants running the full marathon.

Several Glory employees also took part in the race itself, wearing Glory T-shirts bearing a design that shows the transition of the company logo as they made a spirited run to the ﬁnish line.

Participating in the TABLE FOR TWO ("TFT") Program Glory has been participating in the TABLE FOR TWO ("TFT") program since July 2011. The program allows a portion of the proceeds from nutritionally balanced meals provided at the company’s headquarters cafeteria that help to reduce lifestyle diseases to be donated to provide school meals in developing countries. In fiscal year 2018, 17,999 school meals were donated, for an accumulated total of 110,880 donated. In addition, the company installed five TFT-compliant beverage vending machines at the headquarters.

*A program run by a non-profit organization, TABLE FOR TWO International, for donating part of the proceeds from the purchase of designated products at company cafeterias and restaurants in order to provide school meals in developing countries.

Protecting the Marine Environment in the Philippines 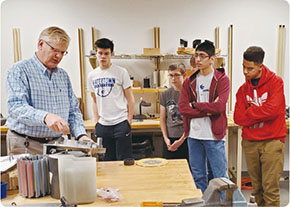 In December 2018, GLORY (PHILIPPINES), INC. donated "reef buds" as its contribution to an ocean regeneration project in the municipality of Rosario in the province of Cavite. This artiﬁcial coral is made from low-impact material and provides a habitat for sea organisms. Reef buds also contribute to the stabilization of the ocean’s pH balance, helping prevent degradation of the marine environment caused by increasing atmospheric CO2 concentrations.

Participating in a Back to School Supply Drive Employees who participated
in the Back to School Supply Drive campaign

Glory Global Solutions Inc. participates in a Back to School Supply Drive campaign run by Child Link, an organization that supports underprivileged children in America. The campaign takes place every year in August and is intended to provide children with necessary school items and prepare them for the return to school in September. Through the organization, over 300 children have received school bags, stationery, and other school items donated by local companies.

Participating in the "V Race Against Cancer" 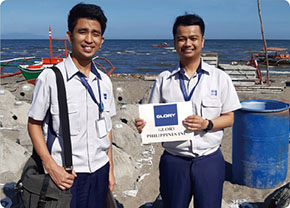 In April 2018, 14 employees of Glory Global Solutions (Spain) S.A. took part in the charity race "V Race Against Cancer." The event’s goal is to contribute to the advancement of research into cancer and raise funds for cancer prevention. Approximately 17,000 runners took part in the event, from which the proceeds will go towards supporting activities of the Spanish Association Against Cancer.