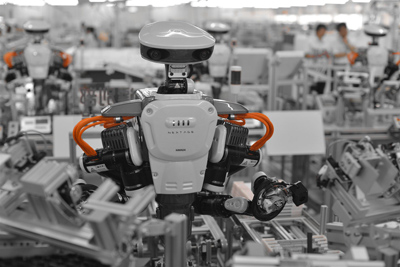 The new automated assembly line incorporating the multi-purpose humanoid robot "NEXTAGE", which was developed jointly by the two companies, is a next generation production line capable of minimizing the lead time for machinery installation and cost in capital investment. This innovative assembly line is also expected to contribute to reviving Japan as a country with core manufacturing technology.

Manufacturers in Japan have been lately relocating their production facilities overseas due to the sharp fluctuation in the yen/dollar exchange rate and other reasons. Also along with the expansion of aging population combined with low birth rates, a hollowing out of the industrial base is supposed to become inevitable in Japan.

Under the circumstances, GLORY adopted the humanoid robots to build a new production line, which is capable of processing detailed precise works in manufacturing currency handling machines using a number of different parts. The new innovative assembly line, capable of stabilizing the product quality, has been built up by adopting the humanoid robots "NEXTAGE", and will flexibly adapt to manufacturing a wide variety of products in variable quantities.

The close collaboration between GLORY, having the technical skills in mass production, and KAWADA INDUSTRIES, having the cutting-edge technology in the robot manufacturing industry, has demonstrated, each providing their respective strengths, a future path toward preserving domestic manufacturing bases in Japan.

We are confident that the challenge between the two companies will enhance the flexibility of automated production line through the adoption of humanoid robots "NEXTAGE", and will become a big step forwards to the innovation of "Manufacturing" in Japan.

For general questions with "NEXTAGE"
Questions from Journalistic Organization